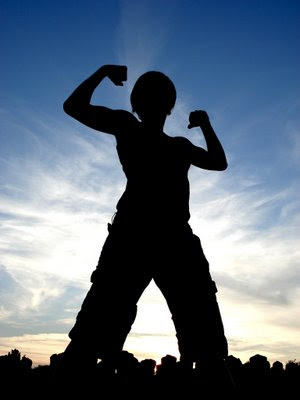 Photo by aeter used under the flickr creative commons license
I was recently asked by one of my colleagues at ThoughtWorks, who my female role models are.

It took a bit of thought to come up with famous people who I want to grow up to be or who I aspire to and I felt like I was picking the same old cliches that everyone picks. The interesting thing that was going on as I looked for inspiring political leaders was that I kept going "oh, I can't pick her because she's a friend of mine".

Then I realised that the people who inspire me are often people you know. People who you look towards for inspiration. I keep reading lists of women in IT who rock but they all seem to be stacked with people from the US and the UK. Here are mine...

Catherine Eibner
I met Catherine at the first Girl Geek Dinner held in Sydney. She ran her own successful business at the time. Now she is an evanglist for Microsoft in the Dynamics space. She travels, speaks, blogs and is an active member and organiser of many community groups including Geek Girl Blogs Podcasts. On top of all of this, she is a mother of a 3 year old boy who never stands still for more than a minute. She is always smiling, even on 2 hours of sleep.

Her best advice to me: "Exhale and enjoy life. We have it pretty good."


Anna Liu
Anna is the lead of the Microsoft evanglisits in Australia. She's the only person I've ever seen the rest of them truly jump for but they all adore her. Anna and I first met at a lunch for International Women's Day in 2008, that was organised by a splinter group who were over the non-technical dominant IT women's group in Sydney. We first bonded over the colours we had worn on the day and then over the idea that this town needed a group for the niche geek girl idea. Through this year, she has supported GGD Sydney and me by arranging Microsoft sponsorship and just being someone who I could send an email to and have a chat. When I saw her speak on a panel for the first time, she inspired me to want to get up there and do it too. Going to lunch with Anna and friends is always blogable but I've learnt to hold myself back :)

Her best advice to me: "Keep doing what you are doing."

Lindsay Ratcliffe
Linz and I work together. At least we used to at a previous client. Lindsay is the guru of User Experience at ThoughtWorks and in Australia through her involvement in the Australian Usabilty Group. She is a huge supporter of the women she works with and most probably the person TW Australia will attempt to clone first when the technology is in beta. Her skills in user experience design have shown me that building applications is less about what the devs think is cool technology and more about how much people enjoy using your final application.

Her best advice to me: "Always think about motives behind why someone may say something nasty to you and throw it away if it just doesn't feel right."

Jodie Miners
Jodie specialises in construction IT. She has many interesting insights in to women in IT and working in male dominated environments and is always positive about our industry. I met Jodie at the first GGD Sydney and we have grown to be good friends. She is actively involved in organsing the IT communities in Sydney and inspires me every time I feel a little tired with my own organising. No matter what happens, she will turn up and support her community because as she has told me, it's about people. After sneaking her in to the TechEd08 party and competing to meet the most new people in a night, I've learnt from her that it's cool to be a geek amongst geeks and never have to apologise.

Her advice to me: "Just keep organising it and they will come."

Pia Waugh
Pia is one of those people who has a wikipedia page, as you do. She's an open source girl but her and I have always found a lot of common ground. I even spare her my rants about giving stuff away for free since I respect her so much. She is major force behind the OLPC in Australia. That includes work in Aboriginal commuities. We met at dinner 0 for GGD Sydney. Since then we have supported each other's causes and even gone to a tupperware party together.

Her advice to me: "Geeks rock! Be proud of it."

Kate Carruthers
Kate and I just keep running in to each other, at work and in life. I guess the universe was going to get us together sooner or later. She's the most relaxed woman I know yet is on the ball and always ten steps ahead of everyone else. She works for herself as a contractor, a writer and an avid social networker. She is inclusive and supportive to all the people around her and has mastered the ability to get her point across strongly without stepping on a single toe. A must in what we do.

Her best advice to me: "Don't worry about it too much. Ask others to help and they will."

Bronwen Zande
Bronwen and I met virtually through Geek Girl Blogs - the biggest women's blog aggregator in the world. She started it. She also works for herself as the expert on Microsoft Live services in Oz, plays volleyball and runs the very successful Brisbane GGD. When we first met IRL after emailing and tweeting for months, she amazed me. She's young, organised and brilliant and the first person in a while who made me want to build a time machine and go back in time to tell myself to do more in my mid-twenties.

Her best advice to me: "Ignore the idiots."

Allison Young
Alegrya as she is better known in social networking circles is the most popular geek girl in this town. She only recently graduated from a degree with honours in IT and is working in her dream job. If only I had known what I wanted at her age. She's energetic and an achiever. Being around her is fun and educational.

Her best advice to me: "You should tweet that."

Hey Damana, you totally rock, and are an inspiration yourself to heaps of us :) Keep up the awesome energy and I've be very interested in hearing your rant about giving things away for free, as I'm sure we will have a very interesting discussion ;)

I'm a school psychologist who works in a high school and I'd like to encourage more female students to consider technology-related careers.

I returned to school at mid-life to take computer courses, and I was surprised to see that there were very few young women in many of my classes. I especially enjoyed studying subjects such as HCI, game design, and information visualization. Technology doesn't have to be a guy thing.

I will share your information about the women you mentioned in your "You Inspire Me" post with students.

Thank you so much for this Damana. I am so flattered - it is an honour to be there amongst the amazing women you have listed all of which continue to inspire me also, as well as yourself.

We are lucky - so lucky to have such great role models that we get to know & work with.