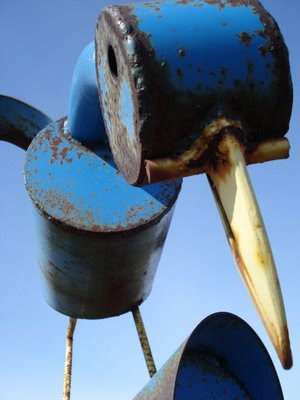 The latest meme on Twitter is for twitterers to blog about Twitter and then tweet it so that it can be retweeted. We all sit around and read it and retweet in agreement or scroll on with a little bit of passive aggression.

Since I'm an individual just like everyone else, here is my Twitter post of choice. It addresses the eternal question asked by those outside the twitterverse about what this is all about - What is Twitter and why should I use it?

My first response to that is usually that you don't have to use it. You could go on for the rest of your life not using Twitter and not feel as though you have missed anything. On the other hand, if you do try it out then there are a few things you will experience and gain that are not so easy to list out and debate over Chinese food. These things are additive, like MSG. They add flavour but some people may not react well to it.

Networking
This is networking in whatever sense you want. If there something that you are in to then there are micro-groups on Twitter that share in your passion and will not hesitate to help or support you with your common pursuit. If you want to connect with people around the globe who can encourage your "thing" then Twitter is your forum.

I use Twitter to network with geek girls; software engineers, ThoughtWorkers; friends around the world; and family.

Reading
I use Google Reader less and less to find things I want to read when I'm not rushing around and have time to stop. Instead I steadily open in my browser the links that people tweet about that sound interesting to me. These are sometimes things they produce but most often are links to other places on the 'net. From this I find new things to read and subscribe to that I would not have found on my own in the lifetime of the universe. The Interblag is a big place and following people with common interests can introduce a new source of information to the pool you have already collected.

Thinking
I often find it useful to share my thoughts with people on Twitter and then discuss them in order to articulate what I think. There are many intelligent and switched on people out there who will actively discuss things with you.

Yeah, it is nice to talk about what you are thinking at the time but the coolest part is listening to interesting people bring up ideas that make me you think. Ideas that challenge your own thinking. Ideas you may never ever agree with but are willing to listen to because it's not being shoved down your throat.

On this point, you must be very careful not to get caught up in group-think. This is very easy to do on Twitter. People do complain regularly that there is too much of this on Twitter and that us being to nice and cuddly towards each other is killing original and critical thought. I do see the danger but also believe that an encouraging environment that allows you to test your assumptions and be wrong without fear of the fail whale pushes creativity and individuality. That in itself can overcome the memes that drift in and out of this growing nest of communities and networks.


Twitter is not for everyone but there is a place for you if you choose to follow. It's something different to every person. For all I've expressed here, there will be someone who sees it differently and that's just Twitter.