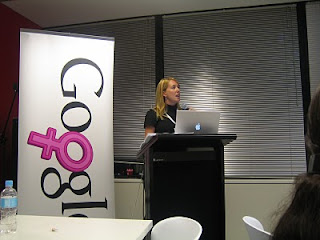 Today is Ada Lovelace Day. It is a day to highlight the accomplishments of women in technology. In particular, to shine a light on a woman who has influenced your life personally.

This post is being written on the day it is due because I had to think about it a lot. It certainly isn't hard to find someone to name and praise because I know so many fabulous females in computing. A shared post on five different geek girls crossed my mind but in the end, I knew it had to be about one person who truly deserved the dedication.

The last 12 months has been an amazing journey and like all good adventures, you encounter interesting characters along the way. Some stay around for a while and others are just meant to come in for a spell and help character development. This is one of those players.

Her name is Lindsay Ratcliffe.

She did this by supporting everyone around her, in her working environment. It was not a motherly thing or done in a condescending way. She has a magic that makes you feel OK to be who you are. By showing respect and consideration to others, she empowers them.

At ThoughtWorks, there are many impressive alpha-females who you can't help but be affected by. The majority of the time, that was in a positive way. Unfortunately like most women in the workplace, they compete against each other. I see men compete a lot but also find ways to work together. I see women compete with men and also work well with them. I don't often see women at the top of their game work well with other women, a lot of the time. Things are changing but they are also staying the same.

When my star shone brightest in the last year, people flocked to my side to bask in the radiance. When it faded to a sputter, only the secure women stayed around. Lindsay simply brought her glow in to back me up. She was kind, inspiring, brilliant and wise when everything around me was falling apart.

She taught me to be kind to myself and not be my own worst critic, as perfectionists often are. She told me that you don't have to be invincible but just need to appear that way. She insisted I stop lying to myself and fix the issues I had in life. She dragged herself out when 8 months pregnant and made sure I survived the hardest days.

I won't use words like selfless and others that are used to describe women. Instead I like to think of her as solid, wise, at peace with herself, smart, charming and organised. She also lives up to what she says she believes.

Since meeting Lindsay, I have not wanted to be her. That was my normal reaction to people I respected and was in awe of. Instead, I want to be me but would love to make others feel the way she makes people feel. Make it ok for people to be who they are, at least around me. Respect everyone for their magic and talent. Celebrate and rejoice at how good life is and be at peace with myself.

I don't want to be her. I want to be just like Lindsay Ratcliffe, while completely being me.
at March 24, 2010