At least we have one 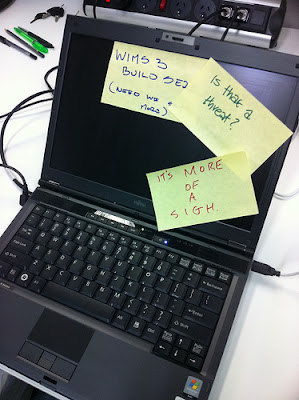 I posted a link to this photo on Twitter this morning. One of the first responses I got was making fun of the fact that the first incarnation of our continuous integration server is on an old laptop. They used the word "quaint".

When I asked the rude person what their server ran on, they didn't even have one. This leaves me thinking that I'd rather have a caravan in the hills than a mansion in the slums.

Excuses about not having the money or permission or a restricted network is not a good enough excuse to not have a server that is building your code, running your tests and preparing automated deployments. Get out there and start building rigour in to your development practices and hopefully finding the emergent quality that accompanies it.

If you don't happen to have one or possess the will to make it happen then shut up because you just look lazy and rude. Lazy on its own is bad enough.

Its really easy sit on the sidelines and snipe while your build is broken and you don't even know it!

Nice work, I reckon you've taken the right approach. It took running the free Professional version of TeamCity on a spare desktop for me to be able to fully demonstrate the value of CI and justify the spend of a dedicated server environment and an Enterprise license. Means to an end, good on you!

Personally, I think an old laptop makes a perfect CI server. Draws less power than a desktop, and you have less corporate IT red tape to fight in order to commission it.