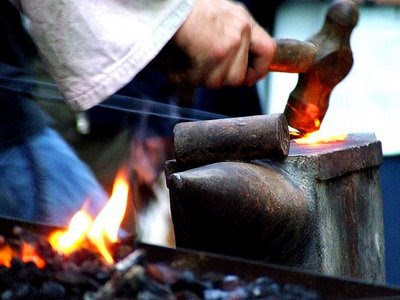 used under the flick creative commons license by caravinagre
I wrote a post a while ago that somehow got on to a few of the IT aggregators and resulted in an influx of readers, many of whom were interested in what was a popular topic at the time. That attention brings out the good, the bad and the ugly on the Interblag.

A friend of mine who regularly blogs about food on our work blog feeder has also recently been attacked by the freak-geek police and told her blog doesn't belong as it isn't technical. Amusingly enough, it wasn't even a work colleague who said this.

After spending an hour listening to Edward de Bono talk about why arguing a point doesn't always produce the best outcome, I'm starting to see that point of view reinforced online. It was probably always there but it seems relevant to me now. So let's discuss it and also annoy the people who think that only code snippets belong in blog posts.

Are any new ideas being added to the blogosphere? Is blogging dead? If it is and there are no new ideas then what or who killed it?

It seems that if you are established, usually not through rising on the Internet but through a more traditional (and rightfully respected) publishing background, then your opinion is rarely knocked online. Social proof or tangible proof. If you are more like the bloggers I see out there with new ideas and different ways of thinking and challenging the established norm, then your words will be hammered. Interestingly enough, it is a small enough group who attacks so it doesn't really matter most of the time. It does however feel like that constant beating at the edges of the blogosphere, is dulling the interesting sparky parts.

It even has the potential to silence any new comers who think they might have something to say and haven't quite found their voice. Instead those who are happy with the way the Internet appears to be to them want to keep it that way. Maintain the average. Silence the creativity. It's an obscure notion to tell someone else not to speak so I will not tell them not to speak as they so happily feel the right to do to others.

Instead, I encourage any of you out there with something to say to stand up and say it. Ignore the push toward mediocrity. I paraphrase the wise and powerful Madonna in saying: Express what you've got, baby ready or not. Express yourself!
at October 27, 2008

I think I may challenge you on the assumption implicit in your post that new ideas are in the blogosphere. Especially new ideas that can't be discussed somewhere else, with a lower noise to content ratio.

By the way, I like your colleague's food blog.